Singapore was quite an experience. We had a marvellous time, right in the middle of the luxury shopping precinct, in a great hotel (Royal Plaza on Scotts).

The weather was bright and very humid (94%), which made walking around the streets a challenging experience. We had E in the baby carrier (and it felt as though he’d put on a few pounds since we last wore it/him) and had to keep ducking into the airconditioned malls to cool off. Luckily (or by good management) the malls in S seem to be set up to allow people to walk through them on their way elsewhere: the mrt (train) or the business district. We even spied a few athletic-looking parents speedwalking through the malls with earphones in and in full walking kit. (Not us, though, obviously. We were sedate and leisurely.)

We ended up having an almost holiday in S, which was a great way to recover from the busy-ness before we left Australia. We ate out – going local except for the obligatory McDonalds brekkie on our first morning – and discovered a few strange variations on Anglo cuisine along the way.
On Sunday morning we went to the Hong Kong noodle house for breakfast, ordering some toast and eggs to keep E busy while we ate tim sum (like dim sum, really!) E’s one slab of toast was three inches thick and covered with melted peanut butter (think of icing on a cake) and drizzled with condensed milk. The eggs were cooked in a saucer of water and came with soy sauce. He ate as much as he could hold and in the end we had to leave to stop him from eating it all.

We ate excellent laksa and noodle soups in some of the eateries under ION Orchard (a huge mall underground from our hotel). E was cosseted by people everywhere we went. He could do no wrong – which turned out to be great when he tried to spill a drum of soy sauce all over the floor of one restaurant…a close save by staff!We had a great time in S and were sorry to leave on our thirteen hour flight to London. However, the Qantas Club in Singapore may be the greatest refuge for a tired parent in the world. H doesn’t know how she will go back to flying without R’s magic status!

E ended up sleeping for 5-6 hours on the flight, and then was like the energiser bunny for the rest of the time.

We were all relieved to disembark at Heathrow and finally get some space! Especially the man next to us in our row. He was a lovely guy, sent back to the UK from Australia because he had the wrong visa. Apparently he was put into detention in Darwin while he waited for a flight to Singapore, and was under a police escort in Singapore until he got on the flight to Heathrow. To add insult to injury, E must’ve slammed his (the guy’s) fingers in the table compartment at least twice; as well as turning off his movie and radio (touch screens + babies = lethal combination) multiple times. He was very patient and nice until the bitter end, for which we are very grateful.

The last ten days have been incidental (in my vocabulary at the moment, that means, full of incident) in our countdown to boarding our plane.

For example: E developed a cyst on his chest which was not responding to some fairly heavy-duty antibiotics, so on Thursday 15 April E and H found themselves in the A&E department of the SAN; then were whisked upstairs to a room in the Children’s Ward for the next two days. E had a minor procedure and two days of I.V. antibiotics. H’s phone died completely and she slept on a bed made of rocks covered in blue plastic. Don’t forget (we certainly can’t) that this was the weekend we had set aside to move the rest of our furniture out of our house prior to painters coming in… so R spent two days torn between: moving; working; visiting E and H, and not sleeping. Yup, it’s been a wee bit busy of late.

Once discharged, we had a Bootes family farewell on the Saturday night, a church goodbye on the Sunday, and then six lovely days with R’s mum. A Graham family farewell was a nice dinner out on Wednesday – spreading the hardest goodbyes out over a couple of days.

In the midst of all this we’ve been: cleaning, visiting, packing and re-packing our suitcases and enjoying some perfect Sydney weather.

We jumped on the plane on Saturday afternoon, not really certain of how we would go on the flight – but thankful to have a short (eight and a half hour) flight to Singapore and two rest days before the final (thirteen hour) flight to the UK. 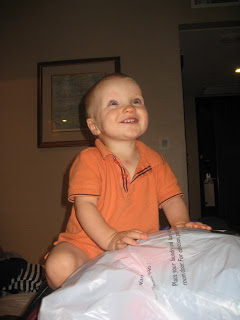 On the whole, the flight was good: a bassinette for E to sleep in (which he eventually did); a family in the same row with an 11 month-old, so we were all in the same boat together; enough patience to let E do his thing (for an almost interminable amount of time); films we hadn’t seen and wanted to and a blanket of prayer from  back home that covered us far more securely than any in-flight blanket could.

Thank you for all your thoughts and prayers – we greatly appreciate them.

As the boxes multiply and our possessions vanish, variously to warehouses and storage; shipping containers and the ocean; and the abodes of friends and family who are taking charge of our more desirable (!) stuff in our absence, we are re-noticing all the changes in our house since we moved in, in December 2008.
Rob has: 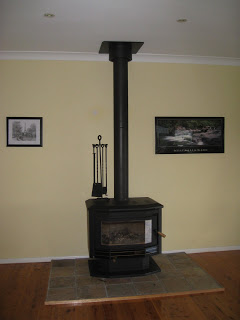 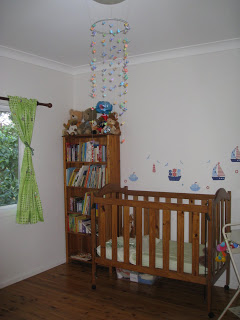 This list is not definitive, and owes much to the generosity and labour of some friends, family and professionals but, by-and-large, Rob has dreamed up and executed this work himself. It has made our house beautiful and more functional – especially with a small chappie beginning to move around under his own steam.

The said small chappie is due to celebrate his birthday on Thursday 8th April, and we are using this milestone to reflect on the joy he has brought to us in the past year. It is an honour to have shared the entrance of our little man into the world as a couple, and a delight to see the changes he has wrought in our lives. We have a messier house with more plastic than we ever hoped for; more food rubbed into the floorboards and more scratches on the floor; and we have been initiated into the mysteries of feeding, bathing and nappy-changing a wriggling (and occasionally protesting) pre-toddler at home and in public. Some nights we long for an umbrella-wielding Mary Poppins to step smartly through the door and put our offspring to bed with a song, others we spend chasing E through the house as he runs around pushing his trolley and careening into walls and doorways, giggling like a speed-freak. 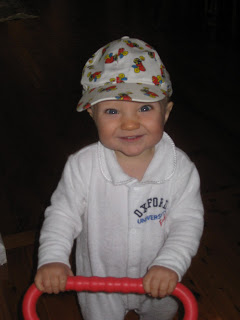 We are getting better at the multiple enthusiastic readings of the stories he loves, and at letting him eat the occasional leaf/handful of sand/fistful of dirt/half a cockroach from one of the moving boxes, without screaming in a deranged fashion and lunging for the offending item in a manner calculated to put him off us for life.
We are accustomed to giving him select morsels from our plates, despite the full meal he consumed only moments before, as well as his bottomless appetite for stirring whatever is on the stove with his own personally selected wooden spoon.
In short (and this hasn’t been) we are joyfully celebrating E’s first birthday as the countdown for our overseas move shortens drastically.
We thank God for the gift of our son, and we wonder more and more each day at the great love of our Heavenly Father, who loved the world so much that He gave His one and only Son, that whoever believes in Him will not die, but have everlasting life.

Exploring the Colorful World of Autism

How to fake a perfect life

Musings & meanderings of days spent in a daze of hope

Words fail, but sometimes I try

It's time to face the fat

| Mrs Woog | Making the most of the mundane

laukate
RRSAHM – Random Ramblings of a stay at home mum